Budding detective, Miss Madeline Brown, has gained quite the reputation for “meddling” in the circa 1900 city of Rockland. With two successful “cases” under her belt, it was only a matter of time before she found something new to interest her insatiable curiosity.

This time, however, the “curiosity” found her.

Challenged by Edward Gastrel, to prove her deductive prowess, Madeline embarks on riddling out the puzzle of a journal left to him by his grandfather. If she can decode the contents, the local gentleman may find himself in the possession of something quite valuable.

As usual, however, things aren’t as they seem, and Madeline finds herself in a race against more than time and ambiguity.


Also in this series: Dead Letter

Chautona Havig’s books are about relationships. Relationships between people and relationships with God. While they are never what I would consider preachy, each one tends to highlight an aspect of the Christian life in a new way, or maybe at least in a way that makes me think.

Russell from Fine Print is my favorite character. I have a feeling that he would have been my favorite in the previous books from the series, had I read them. His relationship with God is so natural and he seems so comfortable with who he is and so steady. His love for God and for God’s word is so real. I really appreciated the advice that he gave to Madeline regarding reading the Bible and truly appreciating it and falling in love with it. I am really looking forward to reading more about him.

While the overall tone of the book is not overtly humorous, the author injected several things that made me chuckle. Characters wishing for things that are yet to be invented (like auto-correct for letter writing) may have made me snicker, even though snickering is quite unlady-like, as I learned.

This story is jam-packed with history. Not as much about events as it is about technology, mindset, and dress. I really enjoyed being inspired to think about things that I hadn’t before from the time. One example is when they were riding in the cab, at night, in the snow, and Madeline was so chilled from the ride that they had to take care that she didn’t get sick from exposure. In all my years of my reading and watching old movies, I’ve always assumed carriages were plenty warm, but why would they be?  Hmm.  Another example was their amazement at being in Edward’s mansion when they had the lights blazing there. The miracle of technology that the circuits were not overloaded is something we wouldn’t even consider today.

Without giving any spoilers, there was a twist (related to the newspaper article) at the end that felt either unfinished or unclear.  I have not decided whether that was intentional or not. Knowing this author’s work, though, I am guessing it is an unfinished detail that will be resolved later in the series.

This is the first of the Meddlin’ Madeline series that I have read. I do want to go back and read the others, especially now.  Though this book stands alone, I think the reading would have been enhanced by knowing some of the details from the previous books.

Denny’s. “America’s Diner.” It’s also my “office away from my office away from home.” Most nights I write at our local prayer house. But on Wednesday nights for a few hours, and then all night on Saturday, I sit in booth 14 and write.

It was a cold, frosty Wednesday night. With thoughts from Bible Study still swirling in my mind and heart, I ordered my loaded baked potato soup and began brainstorming with my writing and podcasting buddy, April.

She left around midnightish—as usual. And another evening regular began chatting.

Look. I like this guy. He’s a fascinating conversationalist. We have a lot of fun talking books, movies, politics, history, computers… He’s even given me a great idea for a book (without meaning to, but still).

I can’t tell you how often this has happened at Denny’s. Employees stop to chat. Regular diners stop to chat. This guy starts a long conversation and always on nights I can’t afford to spend… chatting!

But everything shifted in an instant.

I asked a question.

The next thing I knew, he’d moved into my booth and began firing questions at me. Suggestions. Most of what he suggested wouldn’t work with the story, but he had no way of knowing that. Still, every time he did I got a new idea. And I’d ask a question. He’d answer, suggest. I’d counter—ask or answer. Ideas blossomed and exploded into seeds of even more ideas.

And right there, at two o’clock in the morning, with Angela the wonder server keeping me in fresh glasses of Coke, Fine Print went from not only my favorite of the Madelines (thus far) but also became much more exciting.

The whole thing taught me a couple of lessons. First, I always say that people are more important than the “stuff” I do. Sometimes, that’s not so easy to live. But the Lord is always faithful, like He did that night, to remind me that it sometimes helps me, too.

Second, sometimes a mid-book brainstorming session is just what I need to keep my excitement high. And, if that means a “wasted” Wednesday night in booth 14, then I’d say it’s worth it.

proud to be an autism mom, March 7

Among the Reads, March 17

Have a wonderful Day, March 19 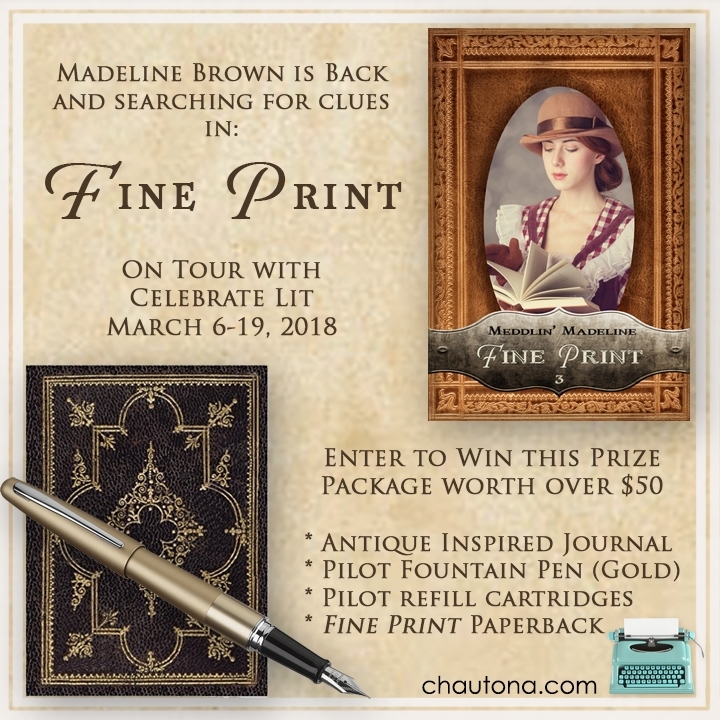 To celebrate her tour, Chautona is giving away a grand prize package worth over $50 that includes an antique journal, Pilot fountain pen (gold), Pilot refill cartridges, and a print copy of Fine Print!!

Chautona Havig lives in an oxymoron, escapes into imaginary worlds that look startlingly similar to ours and writes the stories that emerge. An irrepressible optimist, Chautona sees everything through a kaleidoscope of It’s a Wonderful Life sprinkled with fairy tales. Find her on the web and say howdy—if you can remember how to spell her name.

Will Not See by Chautona Havig – R

Twice Upon a Time by Ashley Clark- Book

Before the Leap by Liz Isaacson –

Yours, Dorothy by E.B. Wheeler – R

The Sleuth’s Miscalculation by Kim